Well Joe and Tiffany finally got married.  Joe was my roommate for my last two years of college.  We got along really well and we had the two best beds in the dorm.  I arrived early every year for soccer so I scoured the dorm for the best beds.  My bed was legendary on campus for its superior comfort.  One year my friend Mark Palmer and I even hosted the school Christmas party from my bed that we had taken to the party.  Anyway Joe finally got smart and asked Tiffany to marry him this fall and they had the wedding on the 18th of December.

On the left are Rick and Nema and Tim hamming it up at the Rice Star, where we had the rehersal dinner.  Jen and I got this picture of The Statue of Liberty while driving around Brooklyn after returning the Tuxedo's.  (I tried to carry all 10 at once, and ended up making a specticle of myself as they kept dropping all over the floor throughout the mall.) 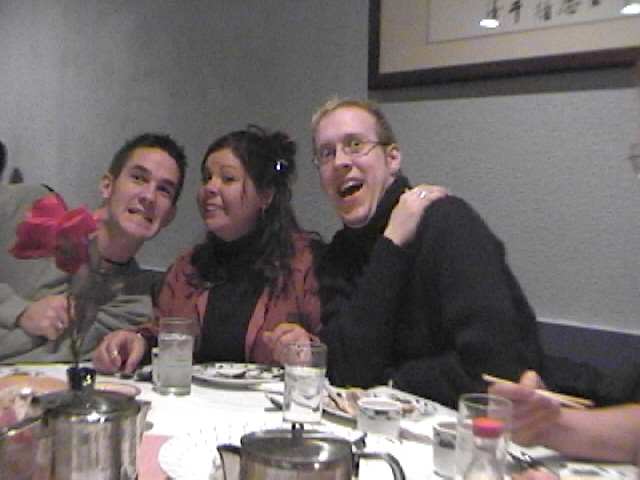 Tiffany was so excited before the wedding.  Before we all walked in I asked her if she was nervous and she said just a little but she was mostly excited.  If you look over her left shoulder you can see Sandy Nicolaides.  Sandy ended up doing a lot for the wedding.  It was really good that she came...she's so gifted at putting things together and helping out.  She really saved the day! 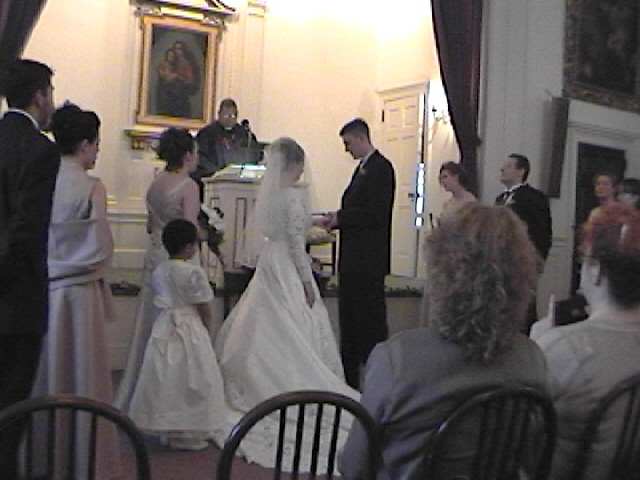 On the left is my always entertaining brother David, Jen (a friend from college) and my pretty sister Julie, who was the Maid of Honor for the wedding.  To the right is the impromptu quartet that sang "Lord, Let Your Light" (Ok, that's just Nema's title of the song), it's really called "Shine On Us".  They practiced about 2 times the night before, and still managed to sound terrific.

Matt, my good friend, and almost-roommate was the Best Man for Joe.  Joe and I would have to kick him out of our room before we went to sleep.   Matt is getting married himself, in just over a month.  I can't believe these guys are actually getting married.  There was some debate over whether it would EVER happen, and now...both of them wed in a matter of months!  On the right my sister Julie is flashing her Rathmell smile.

The day after the wedding, we went to Brooklyn Tabernacle's Christmas Show.  It was really great!  This little sheep stole the show for Nema, Rick and Jen (I didn't even notice him, and was a little perturbed that Jen spent so much time filming him).  It was such a beautiful program, culminating with a short message on peace...a most apropos topic for the season.

That weekend we also hit Rockerfeller Center.  Missy and Brandon came along with us, which was really fun, even though Brandon despises the city.  He was an overall good sport, and we all enjoyed the hustle and bustle of New York.  For many of us, it was the first time around Christmas that we had ever been there.